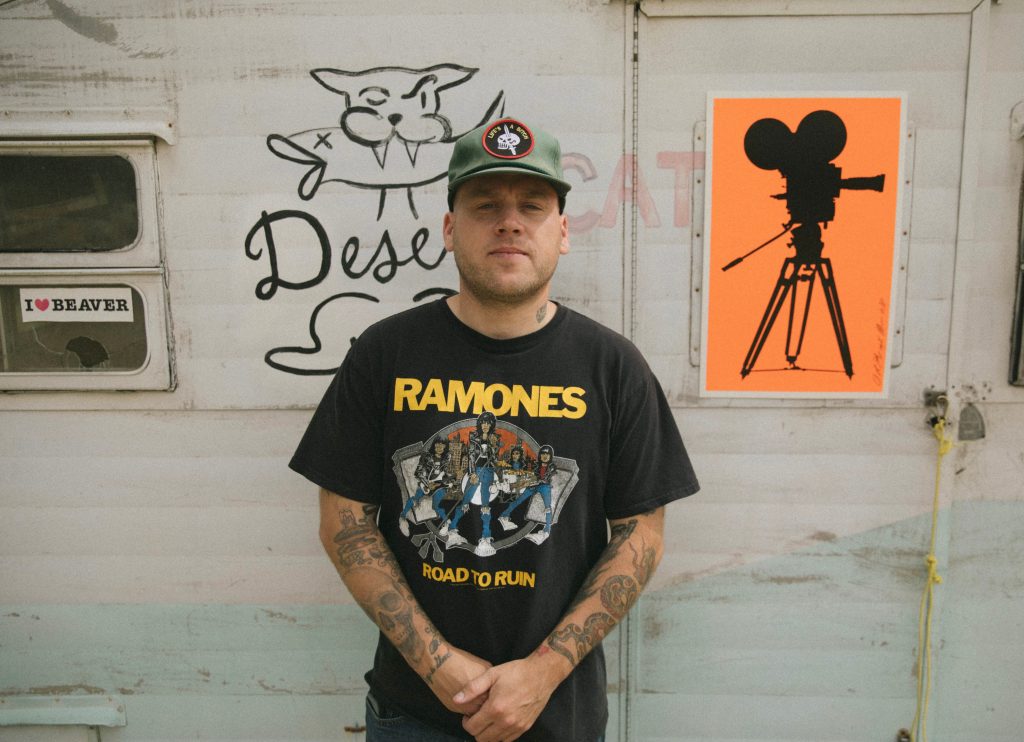 After touring for the better part of 20 years, Matt Caughthran is a seasoned road warrior who is best known as the vocalist for Los Angeles-based punk group the Bronx. He has traveled the world and delivered high-intensity performances,  inspiring legions of fans and bands along the way. For the last two decades, Caughthran has had the privilege of playing alongside some of the most influential artists across many genres. As a result, he’s gained long-lasting friendships and incredible stories along the way.

With touring at standstill due to the COVID-19 pandemic, Caughthran knew he had to stay connected with his friends and get creative with the way he interacted with fans. He also wanted to offer a sense of community and entertainment when it was needed the most.

Read more: Bring Me The Horizon look back on biggest year ever in AP Yearbook (#401)

From friendships forged and connections made, Caughthran decided to give fans an inside look at the conversations and stories between influential figures in music, food, tattoos, art and mixology with his new venture The Sailor Jerry Podcast. The bi-weekly podcast is in collaboration with the famous rum and spirits company Sailor Jerry and goes deep into the lives and careers of each guest, unified through the intersection of punk, art and culture.

Now over 20 episodes in, The Sailor Jerry Podcast has had guests ranging from Keith Buckley of Every Time I Die, Frank Carter, Amyl And The Sniffers and most recently Dennis Lyxzén of Swedish punk innovators Refused, among many others.

In the most recent episode with Lyxzén, Caughthran further proves his natural ability as a podcast host with his charming, positive and welcoming personality that allows his guests to open up about topics they don’t typically talk about. Lyxzén, who is both enigmatic and mysterious with his art, gave an exclusive and in-depth look into his prolific discography across the many bands and projects he has been a part of. He also announced a long-awaited vinyl reissue of the Refused’s second full-length, Songs To Fan The Flames Of Discontent, in celebration of its 25th anniversary. This episode in particular is a must-listen for any die-hard fan of Refused and, in general, anyone who is interested in the stories and legends behind high-concept and forward-thinking art.

We caught up with host Caughthran on a Saturday morning to discuss the new podcast, his favorite spots to get food and drinks in Los Angeles, the legacy of the Bronx, future plans, artists to look out for and more.

With the lockdowns due to COVID-19, was this an impetus to start your own podcast? In addition, how did the relationship between you and Sailor Jerry lead to collaborating on the show?

It was something that I always wanted to do but couldn’t quite figure out how I wanted to put it together. Dana Dynamite, who has been the go-between for the Bronx and Sailor Jerry for over a decade now, ended up reaching out and asked if I wanted to host this podcast since they wanted to do something during the pandemic. Everyone was so limited on what they could do, and [they] basically just asked when I wanted to start. I was very interested, and it took a little bit of time to figure out what we wanted to do, but we laid out an outline and knew we wanted to center it around music, art and counterculture. We’re coming up on the year anniversary, and it feels really good to have made it through year one. It’s a lot of fun.

You have a fun and easygoing demeanor, which in turn makes your guests feel comfortable and open up easily. Would you say that your experience being a frontman for all of these years has informed your hosting process?

Yeah, I’m comfortable talking with people, and that definitely helps. Specifically, with musicians, I know not to ask the stuff that they have heard a million times before. Realistically, it’s about having a conversation and making the guest feel comfortable, and that starts with me. I feel pretty good in that position, and I think I can get people to drop their guard down, which is always a cool thing to hear in an interview. I think my experience helps a lot and comes in handy.

Over the last two decades of touring, were there any specific conversations you had with fellow musical peers on the road that you wish you could have recorded?

Just recently when the Bronx was on the Rancid and Dropkick Murphys tour. Just from hanging out with those guys, every conversation was like, “Oh, my God.” [Laughs.] Those guys are great. I sat down with [Dropkick Murphys frontman] Al Barr, and he told me the story of him joining the band and stuff like that, and I was like, “Man, this is just gold.” I was so stoked as a fan and as a friend of his to know this stuff that I wanted to know for a long time. Those moments are also sacred, too, and I’m still figuring out how deep I want to go. It’s a learning process that I’m grateful for and love doing.

Are there any dream guests you would love to have on the podcast one day?

There’s a bunch. I really want to interview Ice-T. He’s a big hero of mine as far as everything he has done to fight censorship in music, and he’s just a West Coast legend. I would love to get Dave Grohl on the podcast as well. That would be awesome. I also want to get some friends on that I haven’t gotten deep with.

The Shape Of Punk To Come was a huge record for me, just like it was for a lot of people. Dennis has always been a big influence on me, especially with his vocal technique and vocal style and the way that he has grown to do a variety of different styles of music. He’s just a beast and can do it all. That’s something that I really respect and appreciate and strive to do as well between the Bronx, Mariachi El Bronx and anything else.

His new project Fake Names with [Bad Religion guitarist] Brian Baker put out a record in 2020 and is one of my favorites, and I still listen to it all the time. Dennis is just one of those guys who is a true music lover. He’s a record collector. He lives it and breathes it. Anytime you get a chance to talk with someone like that about music, singing and life, it’s just a blessing.

Obviously, the podcast covers more than just music and also features guests from the food, mixology and tattooing communities. What does it mean to you to see all of these different communities come together through the unifying nature of punk rock?

That’s what it’s all about. It’s crazy how much you see punk rockers and hardcore kids branch out in different avenues of life, and it’s the music that keeps everyone connected. We definitely want to have representations of all aspects on the podcast, and obviously punk and hardcore are what I know best, but we want to step outside of that as well and make sure everyone is represented. It is really cool to see the common threads of underground music tying almost everyone together, and it’s always a good way to break the ice.

2022 will be the 20th anniversary of the Bronx’s formation. What is it that keeps you wanting to still play in the band, and why do you think it has resonated with so many people for all of these years?

I just think we love what we do. It comes from an honest, creative place, and I think people respect that. I still wake up every day and do work for the band, and I love it. We love every aspect of being in the band, and I think you have to love all of it in order to sustain and do it as long as we have done it. We’re not like a crazy successful huge band, but we have succeeded on our own terms and carved out this little existence where get to do whatever we want creatively.

It all comes from a place of loving what we do, appreciating the work it took to get this far and not giving up. We have always been one of those bands from the get-go that has tried to outwardly express that we are going to do anything and everything that feels good to us, and I think people have understood that from the beginning. For us, it was a big thing to set ourselves up to not have to exist in just the punk-rock box and just play one type of music. I don’t think that can last very long, and for us, it wasn’t about that, and that’s why we were able to be on indie labels, major labels, take the Mariachi detour with our music, play with hardcore bands, metal bands, rock ‘n’ roll bands and really just do anything and everything.

Are there any new artists you are currently listening to that you want to shout out?

The new Chubby And The Gang record The Mutt’s Nuts is awesome. You can’t talk about new music and not talk about Turnstile. The shit that those guys are doing is on another level, and I’m stoked to see that happen and think it’s good for music in general. There’s also a whole new thing happening in LA right now that my old ass hasn’t gone out to see yet, and that’s that whole Dead City Punx thing.

There’s a whole new realm coming into play, and I’m excited to check it out, and it’s something that’s really exciting to see as someone from LA. It’s a good time in underground music, especially in punk and hardcore. It feels like there is new energy and a new wave getting to crash. There’s always that origin of backyard party punk rock that happens in LA especially. It’s like the core of punk at its existence. It’s dangerous, it’s fast, it’s loud, it’s chaotic, and if you’re not down with that, then I don’t know. [Laughs.]

What do you have in the works for the next year with the Bronx, Mariachi El Bronx and anything else you are currently involved in?

We’re always working. We have a couple of tours booked. We’re heading over to the U.K. and Europe with Every Time I Die in mid-January, so that’s going to be dope. We’re also writing new Bronx tunes because things are flowing really well, so we might be putting out a surprise tune here and there next year. Eventually, we will get back into the suits and put out a Mariachi El Bronx record, too. There will be a bunch more activity from both of the projects in the years to come, for sure. You can count on that.

The post The Bronx’s Matt Caughthran on his new venture ‘The Sailor Jerry Podcast’ appeared first on Alternative Press.

Please support us on Patreon!

Who Is ‘Pam and Tommy”s Lily James?