7 artists who were banned from ‘SNL’ for their badass performances

Getting booked as the musical guest on Saturday Night Live is the perfect way for any artist to become a household name. But with the national spotlight comes the show’s strict standards for guests, leaving some outspoken artists to feel restrained. As punk and alternative became more mainstream in the ’80s, the show began to […]

The post 7 artists who were banned from ‘SNL’ for their badass performances appeared first on Alternative Press.

Historically speaking, this is a pretty good time for Public Enemy to be bringing noise. They are answering the call. The stentorian ’80s rap greats just returned to their old home at Def Jam and released the new album What You Gonna Do When The Grid Goes Down? The new LP features appearances from many… 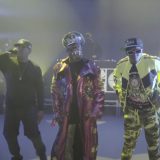