At the end of the week, Bad Moves are releasing their sophomore album, Untenable (digitally at least). The album was supposed to come out last month, but got pushed back due to pandemic concerns, which means we’ve heard a nice chunk of singles: “Party With The Kids Who Want To Party With You,” “End Of… 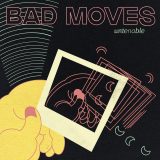 Bad Moves are a punky indie-pop band from Washington, DC, and they released an extremely fun debut album called Tell No One a couple of years ago. This summer, they’ll follow it up with the darker-but-still-fun new LP Untenable, which they recorded with Hop Along guitarist Joe Reinhart on board as producer. We’ve already posted […]

Last month, the Washington, DC band Bad Moves announced their sophomore album, Untenable, with the urgent and bouncy lead single “Party With The Kids Who Want To Party With You.” The planned release date of the album has been pushed back a month — to late June — in order to account for a vinyl […]