In recent years, a whole lot of rappers have gotten out of jail and headed straight for the recording studio to talk about how they were feeling. The “First Day Out” freestyle has been something of a rap tradition for about a decade now, but that’s not the direction that Bobby Shmurda went. In 2015, Shmurda, a teenage Brooklyn mixtape rapper, broke out suddenly when his single “Hot N***a” barnstormed the top 10 of the Billboard Hot 100. Mere months later, Shmurda and his entire G59 rap crew were arrested on gang charges. Shmurda, who took a plea deal in 2016, finally got out of prison in February. Since then, he’s done interviews and performed at festivals, but he’s only just now released his first song since getting out.

J Balvin also appears on the track For more, check out: RollingStone.com (Source)

Travis Scott, Lil Baby, Megan Thee Stallion, Young Thug, and more were among the standouts at the Miami festival For more, check out: RollingStone.com (Source)

Seven years ago, the teenage Brooklyn rapper Bobby Shmurda came out of nowhere to become one of the biggest rap stars in New York. Shmurda’s track “Hot N***a,” originally just a freestyle over the beat from a Lloyd Banks track, had gone mega-viral and crossed over onto the pop charts, peaking at #6 on the Billboard Hot 100. But a month after the release of his debut EP Shmurda She Wrote, New York police arrested Shmurda on conspiracy to murder, reckless endangerment, and gun possession charges, sweeping up more than a dozen members of his G59 rap crew at the same time. Since then, Shmurda has been in jail, and he’s spent much of that time awaiting trial. Today, Bobby Shmurda comes home.

Bobby Shmurda has been denied parole, per a report from TMZ, who say that the rapper was interviewed by the parole board last week. TMZ says that he is now expected to held in prison until the end of his sentence in December 2021. Shmurda, real name Ackquille Pollard, was arrested in 2014. 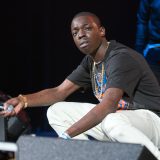