Gallant Floats Through Heartbreak on ‘Scars’

Track is a highlight of the R&B singer’s new EP, Neptune For more, check out: RollingStone.com (Source)

In June of 2020, the American Association of Independent Music (A2IM) partnered with Billboard to expand the parameters for the Top Independent Albums chart, allowing more independently-owned labels to appear on the ranking. Now A2IM is congratulating some of the first independent artists and labels to top the chart, honoring them with the A2IM Independent #1 Award. Recipients of the A2IM Independent #1 Award include Bad Bunny (YHLQMDLG; Rimas), Brandy (b7; Brand Nu Ent./eOne), Eslabon Armado (Vibras de Noche; Del Records), Morgan Wallen (If I Know Me; Big Loud Records), and Young Dolph (Rich Slave; Paper Route EMPIRE). Starting with the Billboard chart dated July 18, all independently-owned labels that control their […] Artists freestyle over Brandy’s 1994 gem “I Wanna Be Down” For more, check out: RollingStone.com (Source)

Back in the peak era of initial quarantine, Timbaland and Swizz Beatz did a DJ battle on Instagram Live that kicked off the Verzuz series. It became a whole thing — so much so that in April, we published a column imagining the best Verzuz battles we’d like to see. What happened tonight on Verzuz,… 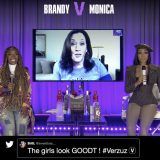 Hailee Steinfeld was precocious from the start. At just 14 years old, Steinfeld scored an Oscar nomination for Best Supporting Actress for her role in the Coen brothers’ 2010 True Grit remake. None of her gigs in the decade since have dripped with quite so much prestige, but appearances in films like the critically acclaimed […]