The Venus In Scorpio starts an empowering LGBTQIA+ party with “Blissed”

Maxim Faster, aka the Venus In Scorpio, is an electro-pop star in the making. Powered by a battery of synthesizers and a voice that’s more rock god than pretty android, VIS is merging the synthetics of the ’80s with boisterous rock vocals. Described as the “mysterious and moody They next door,” the Venus In Scorpio’s […]

The post The Venus In Scorpio starts an empowering LGBTQIA+ party with “Blissed” appeared first on Alternative Press.

Orville Peck was supposed to release a new EP a couple weeks back, but the masked country singer pushed its release date back to sometime in July in order to make more room for Black voices during this time. There’s still no exact release date for his Show Pony EP (which will include a duet… 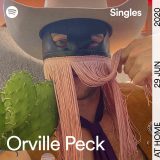