Certain Death, the 2019 debut album from the Oxnard shit-rippers Dead Heat, was an absolutely nasty piece of work — a fast and grimy and absurdly fun slap of ’80s-style crossover thrash. Certain Death one of my favorite hardcore albums of 2019. But today, Dead Heat have left that album in the dust. Dead Heat’s new LP World At War is a massive step up in every way, an absolute ass-beater of an album. You probably already figured it out from the cover art, but this thing means business.

We should talk about Madball. Good band. Hard band. Madball have existed, in one form or another, since the late ’80s. As a child, Freddy Cricien, now almost universally known as Freddie Madball, would jump onstage with his half-brother Roger Miret’s band Agnostic Front. Madball started off as basically an Agnostic Front side project, with most of the band backing up 12-year-old Cricien. Eventually, Madball found a relatively stable lineup of their own — bassist Jorge Guerra has been in the band since 1993 — and became a regular touring act. By the time Madball released their debut album, the 1994 ass-beater classic Set It Off, the band’s style had solidified. They played a direct, chest-thumping variant on New York hardcore, with metallic chug-riffs and choppy, rap-adjacent vocal cadences and lyrics about all the different reasons that Madball and their friends might potentially fuck you up.

Two years ago, the Oxnard, California band Dead Heat released their absolutely stomp-ass debut album Certain Death. The album drew on the history of crossover thrash, the late-’80s moment when hardcore and metal fused into one berserker kamikaze-skater beast, and it injected a whole lot of frantic energy into a style that wasn’t exactly low on energy to begin with. Today, Dead Head have announced that their new LP World At War will arrive later this spring. Its cover art is a thing of beauty.

The Month In Hardcore: September 2020 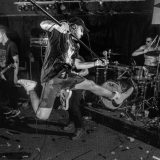 The city of Oxnard, California has a long and proud history of hardcore punk. Since the early ’80s, Oxnard has been cranking out fast, snotty, exciting music. If you care about hardcore, the big compilation that you need to know about today is the massive new fundraiser Shut It Down: Benefit For The Movement For… 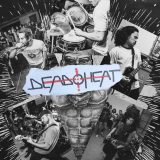