18 alternative songs that were actually nominated for Oscars

There are three types when it comes to songs in feature films: The first is the song that you just know isn’t only going to be nominated for an Academy Award but in all likelihood will win it; the second is the song that’s snubbed by the Academy in a year jam-packed with standard Oscar […]

The post 18 alternative songs that were actually nominated for Oscars appeared first on Alternative Press.

This past weekend, as previously announced, longtime Wu-Tang Clan comrades Raekwon and Ghostface Killah went head-to-head in the latest battle from Swizz Beatz and Timbaland’s pandemic institution Verzuz. It was made for a fun heartwarming spectacle — two old friends bantering back and forth, rapping immortal tracks at each other. Fellow Wu-Tang friends like RZA, Cappadonna, and Inspectah Deck made guest appearances. (You can catch the replay here.) When the show was over, Verzuz announced that it had more battles on deck.

It’s September, and you know what that means: It’s the month named after the eternal Earth, Wind & Fire track “September”! I don’t know what we called the ninth month of the year before “September” came about in the year 1978, and I’m glad I don’t have to remember. 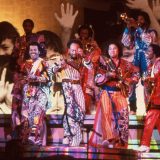