Watch Members Of Lamb Of God, Quicksand, Integrity, More Cover Prince’s “I Would Die 4 U”

Most weeks, the people behind the great video series Two Minutes To Late Night round up all-star one-off supergroups of people in metal, punk, and hardcore bands. Last week, though, Two Minutes To Late Night only featured one band. In support of a friend who’s going through a hard time, the comedian Jordan Olds recruited Thursday to cover Bruce Springsteen’s “Dancing In The Dark.” This week, the series has gone in a radically different direction. It’s got a ridiculously huge group of people — 21 musicians in all — to salute Springsteen’s main competition on the 1984 charts.

Watch Ted Leo Cover The Replacements With Members Of Converge, Rise Against, More 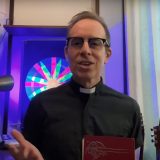