After taking almost five years to follow up Purpose with Changes, Justin Bieber began rolling out his Changes follow-up within a few months. I guess when your tour is postponed due to a global pandemic, you might as well record. However, despite billing the Chance The Rapper collab “Holy” as the dawn of a new… 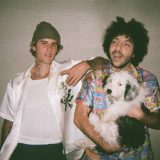 Haim’s new album Women In Music Pt.III was supposed to be out last Friday, but like so many major 2020 releases, it’s been delayed due to coronavirus. Upon postponing the album, the band said they’d be releasing it “later this summer,” and as of today we know it’s actually dropping early in the season, on […]