For nearly 30 years, the Mountain Goats’ John Darnielle has been writing poignant and sharp short stories and recording them in song form. Darnielle was one of the best writers in America long before he ever wrote a book, but it turns out that he’s pretty great at writing books, too. Real heads know that Darnielle’s real first book was the truly great 33 1/3 entry about Black Sabbath’s Master Of Reality, published in 2008 as a novella about a kid in a psych ward. Since then, Darnielle has published two much-admired novels: 2014’s Wolf In White Van, which was nominated for a National Book Award, and 2016’s Universal Harvester, which was really just as good. Today, Darnielle announces that he’s got another one on the way.

The Mountain Goats released two new albums last year: the full-band Getting Into Knives and the John Darnielle-only boombox record Songs For Pierre Chuvin. They were both recorded in March 2020, right as the whole world was going into lockdown, and it turns out that Darnielle and co. made another album during that time, recorded in the week that separated the creation of Getting Into Knives and Songs For Pierre Chuvin.

Bonus episode! Our guest for this Sunday edition of Transmissions is John Darnielle of the Mountain Goats. He’s got two albums out this year—first, a lo-fi boombox recorded tape, Songs for Pierre Chuvin, and now, Getting Into Knives, recorded with the full Mountain Goats band and producer Matt Ross-Sprang at Sam Phillips Recording in Memphis. John’s songs have hailed Satan and cast possums in a theological light. He’s written about myths, tragic heroes, and people trying to unwreck themselves. We were very excited to speak with him about his latest and much more.

Long before he became an acclaimed literary novelist and the famous-ish frontman of an indie rock institution, the Mountain Goats’ John Darnielle was a cult-favorite songwriter. On hard-to-find releases spread across a vast spectrum of DIY labels, Darnielle would crank out vast numbers of fiery lo-fi acoustic songs. Many of those songs were both quite… 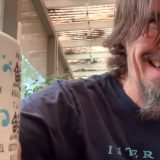 Before the Mountain Goats became a real band, they were just John Darnielle, alone with an acoustic guitar, yelling fire and brimstone into a Panasonic boombox. And now, in these crazy mixed-up times we find ourselves in, that is what the Mountain Goats have once again become. For the past several weeks in quarantine, Darnielle […]