10 films that were flawlessly scored by singer-songwriter Danny Elfman

The soundtrack behind a movie sets the emotion and tone for a scene. Mastermind Danny Elfman has a way of capturing that exact feeling. Elfman showcases various sides to his creativity and emphasizes an ominous and slightly eerie atmosphere in “Sally’s Song” from Tim Burton’s The Nightmare Before Christmas. He also shines a light on […]

The post 10 films that were flawlessly scored by singer-songwriter Danny Elfman appeared first on Alternative Press.

It’s a new day which means there are even more teasers and information surrounding Spider-Man 3 to absorb. This week, Sony shared a cryptic new clue for the Marvel film that finally addresses that massive Spider-Man: Far From Home cliffhanger. Read more: YUNGBLUD takes on Olivia Rodrigo’s “drivers license” in new cover—watch For those of […]

It looks like there’s even more speculation and rumors surrounding Spider-Man 3 to unpack. This week, a new leak has seemingly revealed the plot and official title for Spider-Man 3. As well, Zendaya may have finally confirmed that this familiar face is really returning for the new Marvel film. Read more: Elon Musk is backing Reddit’s GameStop […]

The post This new leak may have just revealed the entire ‘Spider-Man 3’ plot appeared first on Alternative Press.

Another familiar face from Peter Parker‘s past is officially making a return in Marvel‘s Spider-Man 3. The character joins Jamie Foxx‘s Electro and Benedict Cumberbatch‘s Doctor Strange who are also starring in the upcoming Marvel Studios picture. Read more: This new MCR Funko Pop! is a nod to one of their classic album covers It […]

The post This villain’s return may have just confirmed that ‘Spider-Man 3’ crossover appeared first on Alternative Press.

American Horror Story and Scream Queens star Emma Roberts has confirmed she is pregnant with her first child. Over the weekend, Roberts revealed that she and boyfriend Garrett Hedlund (Tron: Legacy, Friday Night Lights) are expecting a boy. Read more: Here’s the first look at Bring Me The Horizon and YUNGBLUD’s new collab Rumors emerged […] 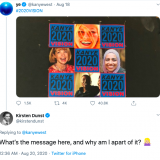