Last year, Marie Davidson formed a new band called Marie Davidson & L’Œil Nu. Their first full-length together, Renegade Breakdown, was a collision of a whole lot of different sounds, from loungey psych-folk to tattered rock music and everything in between. Today, they’re back with a new single called “Persona,” which they’re serving up in three ways: crunchy, soft, and trippy. The band says the three-pronged approach is inspired by the psychologist Carl Jung.

The Montreal musician Marie Davidson has been making dance music for the better part of a decade, most recently with 2018’s Working Class Woman, which was grounded by the stunning breakout single “Work It.” Today, she’s announcing a new full-length album called Renegade Breakdown, and it’s attributed to Marie Davidson & L’Œil Nu, the name… 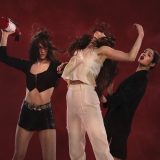