Revolver is a new film from Finding Nemo co-director Andrew Stanton centered on Jane, a teen in 1966 whose mission in life is to lose her virginity to George Harrison. The movie, see, is named for the masterful Beatles album that dropped that year, but it’s maybe also a double entendre, see? 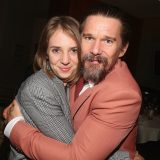 This ‘Stranger Things’ character might not be dead after all

Last week, Stranger Things confirmed that filming and production for season 4 have resumed following coronavirus delays. Now, new theories that emerged that one villainous character may not be dead after all and could return in the new season. Read more: Motionless In White are performing ‘Creatures’ in full for the first time Stranger Things […]

The post This ‘Stranger Things’ character might not be dead after all appeared first on Alternative Press.

See another sneak peek of ‘Stranger Things 4’ as filming resumes

It feels like centuries have gone by since we last saw the Hawkins gang fight off creatures from the Upside Down in Stranger Things season 3. Now, it looks like we won’t have to wait too much longer for Stranger Things 4. The Netflix series confirmed this week that filming and production have resumed. Read […]

For every dad out there sporting a vintage London Calling tee and ready to deliver an epic monologue about the utter and complete underappreciation of Joe Strummer, there are at least 50 more either unable to or uninterested in rocking the Casbah, even if a crash course in the Clash was solely for his son […]

With Stranger Things 4 likely to arrive sometime in 2021, fans are anxiously awaiting the arrival of the new season. Now, the show’s creators Ross and Matt Duffer are spilling new secrets about season 4. In a new interview, the Duffer Brothers share a bit of information about what Stranger Things‘ new season will hold including […]

The post It looks like ‘Stranger Things’ season 4 will have some major guest stars appeared first on Alternative Press.

Due to coronavirus, production for the fourth season of Stranger Things came to a sudden halt. Now, the hit Netflix series is likely to premiere in 2021 instead of later this year. Following the season’s first teaser back in February, few details regarding season 4 have been released. Now, the writers for Stranger Things have […]

The post Apparently this is how long it’ll take to binge ‘Stranger Things’ season 4 appeared first on Alternative Press.

Samia – “Is There Something In The Movies?”

Samia put together a pretty fascinating 2019 that ranged from collaborating with the obscure NYC indie band Active Bird Community to covering Liz Phair to performing at Stereogum’s SXSW party. Now she’s back with a compelling new ballad and a music video starring some of her fellow Hollywood youths. Samia is the daughter of actors […]