Sam Smith on Celine Dion, Joni Mitchell, and Their Favorite Songs of All Time

The singer-songwriter breaks down their ballot for Rolling Stone‘s 500 Greatest Songs of All Time list, including tracks by Celine Dion, Robyn, ABBA, Joni Mitchell, Rihanna, and more For more, check out: RollingStone.com (Source)

From legends like Chaka Khan and Randy Newman to rising stars like Yola and Yasmin Williams, our favorite performances from the fest’s first weekend For more, check out: RollingStone.com (Source)

In 2020, there’s no such thing as a bad idea for a television show. The medium has positively exploded in terms of sheer volume, thanks to the rise of myriad streaming services — and with that explosion has come a near-endless onslaught of creative endeavors both extremely successful and ill-advised. This tidal wave of content… 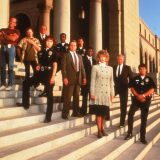 Material: You might know Gary Stockdale because he was an original member of the Brian Setzer Orchestra. Those with a keen eye might be aware that he’s written music for TV shows such as Sabrina the Teenage Witch, Penn & Teller: Bullshit!, and CBS’ A Home for the Holidays. He even co-wrote the musical Bukowsical. The guy has been around for a long time and, in fact, has a rich resume, including a number of albums of his own. That said, his gift for writing soundtrack music is key—there’s a wonderful storytelling quality to all of his songs, alongside a […]

National treasure Randy Newman was on The Tonight Show Starring Jimmy Fallon last night to perform his still-applicable 1974 Good Old Boys track “Mr. President (Have Pity On The Working Man).” “This is a song I wrote back in the Pleistocene era. But it’s become relevant again” is how he introduced it. It’s his second […]