Last year, longtime rap traveler Aesop Rock released his psychedelic, head-spun self-produced LP Spirit World Field Guide, and it was one of my favorite rap albums of last year. A couple of months ago, Aesop and frequent collaborator Homeboy Sandman came out with “Ask Anyone,” their salute to the late MF DOOM. And today, Aesop Rock has returned to celebrate National Frog Day. (That’s a thing. It’s today.) 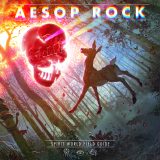