The Jefferson Starship are one of those weird rock-history stories — a band now mostly remembered as a strange little connective-tissue thing. The Jefferson Airplane had been one of the standout bands on the late-’60s San Francisco psych-rock scene. In the mid-’70s, co-founder Paul Kantner pushed the band in a more sci-fi direction, and the Jefferson Airplane changed their name to the Jefferson Starship. In 1984, Kantner left the band, and the remaining members, after a court battle, went on as just Starship. Under that name, they scored three exceedingly generic #1 hits in the mid-’80s. That means that the Jefferson Starship are now remembered as a kind of in-between space. But now, they’ve got their own episode of Two Minutes To Late Night.

After taking some time off, the great video series Two Minutes To Late Night appears to be fully back. In these videos, bandleader and comedian Jordan Olds, in his Gwarsenio Hall persona, rounds up people from the worlds of metal, punk, and hardcore to play fired-up remote covers of old songs. In recent weeks, Two Minutes To Late Night has saluted Pantera and the cheesed-out dance-pop anthems of the ’90s. Today, we get a Rolling Stones banger. Well, this rules. Every week during quarantine, the Two Minutes To Late Night series has been bringing together all-star bands from the worlds of metal, punk, and hardcore to record remotely, playing fun covers of hardcore songs. In recent weeks, the series has saluted Type O Negative, Rage Against The Machine, and Billy Idol. Today,… 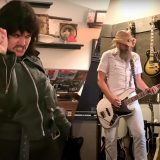