The rapper’s second posthumous album has some dazzling moments, but ultimately feels like business as usual for an audience whose attention may be elsewhere For more, check out: RollingStone.com (Source)

Given how incredibly overexposed Migos were at their post-“Bad & Boujee” peak, it’s amazing that they’ve now gone more than three years between albums. But it’s true: Culture dropped way back in January 2017, followed by its double-album sequel Culture II just 12 months later. Now, after an interminable stretch of solo albums, scandals, and mostly mediocre singles, the triplet-friendly trap trio that once ruled rap is finally back with Culture III.

Takeoff, one of the three members of Migos, has been accused of rape in a lawsuit filed in Los Angeles civil court, as The New York Times reports. The lawsuit alleges that a woman, identified as a Jane Doe, was raped by Takeoff during a house party in June that was thrown by Migos producer… 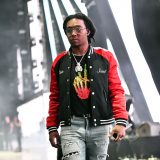