It’s been nearly two years since the War On Drugs played their last live show, a December 2019 gig in their Philadelphia hometown. In a week and a half, the band will make their proper live return at the Desert Daze Festival. Early next year, they’ll head out on a big tour that will include a stop at Madison Square Garden. A few days ago, the War On Drugs finally released their great record I Don’t Live Here Anymore. And today, the band has given us a preview of how those new songs might sound when they play them live.

The mutant Atlanta rap star Young Thug has been a prolific mixtape force for a solid decade, but he’s only categorized one of his releases, the 2019 hit So Much Fun, as a straight-up studio album. So it’s notable that Thug his now making another album — his second, at least according to him — and that he’s calling it Punk. (He first announced that album title in 2019.) Thug started out as a challenging, boundary-pushing presence, and he now appears to think of himself as a rock star. Paradoxically, an album called Punk seems like the most retrograde thing that Young Thug could do, especially since it seems like Travis Barker will be involved.

Jack Antonoff is releasing a new Bleachers album, Take The Sadness Out Of Saturday Night, at the end of the month. The album opens with a track called “91,” which has a songwriting credit from famous writer Zadie Smith. Antonoff revealed news of the collaboration in a recent Rolling Stone interview.

Sad13 is ready for All Hallows Eve sharing a new video for “The Crow” as well as a devilish performance for NPR Tiny Desk. The animated lyric video is filled with monsters and continuously onlooking eyes — perfect for the upcoming holiday. Sad13 explains the process of creating the song below:… From the corner of a tree-shaded porch at her North Carolina, home, Angel Olsen performed four songs for NPR’s Tiny Desk (Home) Concert, kicking off with the title track from 2020’s Whole New Mess album. Olsen also plays “Iota,” from her 2014 album Burn Your Fire for No Witness, a song she tells viewers is about… 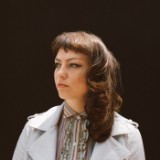 With many, including the NPR Music staff, working from home, musicians have been recording themselves performing the iconic Tiny Desk sets themselves. Whether it’s been in their homes or in the Caribbean, fans have been treated to a variety of looks in the series. But Billie Eilish and Finneas brought us back to…